Aloof is a cute puzzle-battler with adorable animals in which you defend your small islands.

The game is perfect for classic Tetris lovers and fans of Puyo Puyo Tetris or Super Puzzle Fighter Turbo II.

This unique and challenging game, created by ButtonX, is heading to Nintendo Switch later this year, thanks to a global publisher RedDeer.games.

Embark on a marvelous adventure in the colorful world of Aloof, where challenging levels with multiple win conditions await you.

Play as a cute brave bunny and face the opponent to protect your little islands.

Enjoy beautiful and peaceful piano music while fighting your enemy. Play solo or with your friends in the local co-op mode.

Summon small islands and defend them against your opponent. Move pieces left, right, down and up. Keep in mind that pieces don’t descend by themselves, so take your time to think and move fast to repel an opponent’s attack successfully! 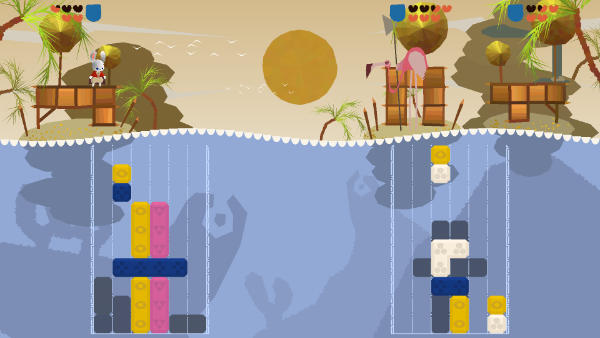 If you’re not satisfied with the pieces in your field, you can just flush them away by holding the flush button.

You can switch between 2 fields so that you don’t need to mess up your amazing combo if something else needs to be done first.

SOLO OR COUCH CO-OP CAMPAIGN
Experience a challenging adventure in the unique world of Aloof solo or with your friends and family in local co-op mode!

Compete with your loved ones in 1v1 or 2v2 matches in the co-op campaign with puzzle levels, matches versus AI, rescue missions and bosses!

RedDeer.games is an award-winning global gaming company that focuses on developing and publishing unique indie games.

Currently, the company is working on the science fiction game Time Hole, with former NASA director Dr Alexander Nawrocki as a consultant, and the comic, humorous platformer 7 Horizons. We also announced two games in the universe of the beloved comic „Kayko and Kokosh”.

ButtonX is an independent game development studio based in Hague, Netherlands, funded by Joram Van Schaik.

Joram is a self-taught software developer. In recent years he has made the step to IT. He worked as a cyber crime investigator, and lately, he started working as a full-time developer.